EXS Air Thin are amongst the thinnest quality latex condoms in the world, they have a comfy 56mm fit, have no latex smell and feel like you are wearing no condom.

Vegan-approved and Cruelty-Free. EXS are vegan approved. EXS take great pride in being cruelty-free with no animal testing whatsoever. EXS standards have been awarded by the Vegan Society.

Quality Testing
EXS factories as well as the British Standards Institute, BSI, both test our Condoms.

Our EXS condoms have a number of tests performed on them including, each condom being electronically tested for holes, and samples being burst pressure tested for strength. The quality of the latex we use for our condoms and the vigorous testing we perform means we can be confident that EXS condoms are amongst the best quality condoms in the world.

There are no reviews yet. 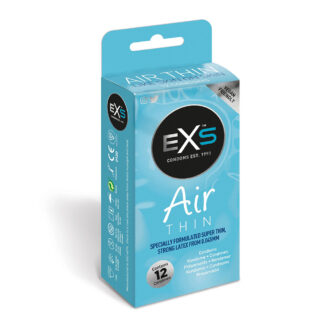